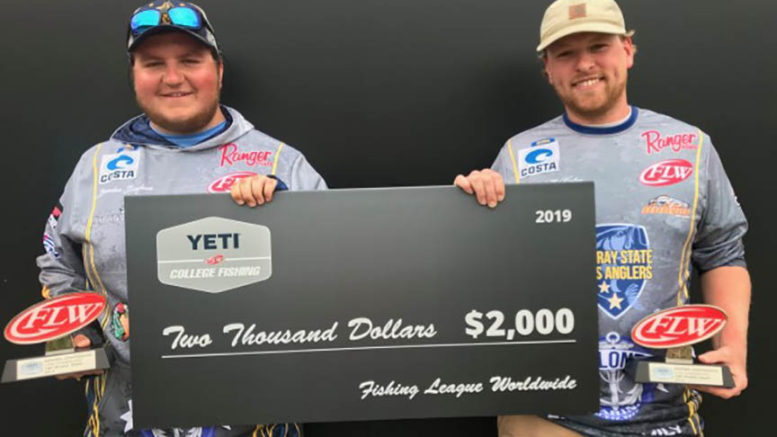 The Murray State University Bass Anglers fishing team is having one of the best years in recent memory as it reaches midseason.

The team is on a roll, as the anglers were ranked second in the country in the latest Association of Collegiate Anglers standings.

Competing in places as far as Alabama, Arkansas and Wisconsin, the team’s most recent victory came at Lake Cumberland during a Fishing League Worldwide College Fishing tournament in April.

With a five-bass limit weighing in at 19 pounds and 8 ounces, Murray State sophomore Brenden Bingham and graduating senior Hunter McKinley took home the top prize of $2,000.

The win earned the team a spot in the 2019 FLW College Fishing National Championship in Marbury, Maryland scheduled for June 4-6.

FLW is the world’s largest tournament-fishing organization. Each year, FLW offers anglers of all skill levels the opportunity to compete for millions in prize money across the globe in five tournament circuits.

Team president Nick Montilino, a graduating senior from Minneapolis, Minnesota, has high hopes for the national championship after a season full of intense competitions.

“Bass fishing is a unique college sport and you may be surprised, but there are hundreds of schools that compete in it, big and small,” Montilino said. “We have been to events this year around the entire country. We’re looking forward to the national championship — if we place well, we can finish the year in first place!”

The Murray State Bass Anglers fishing team will begin its hunt to secure a national title in the FLW Championship.