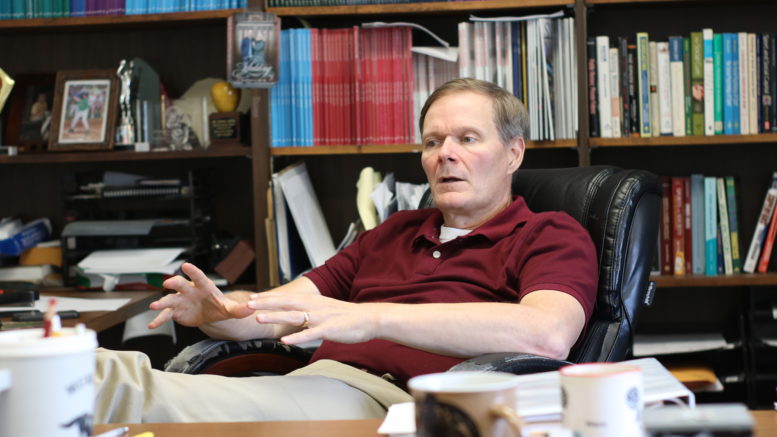 Daniel Wann shares his expertise on sports psychology during an interview with The News. (Photo by Blake Sandlin)

Every month, Daniel Wann, a professor of psychology at Murray State, sits down with The News to address the increased juxtaposition of sport and reality.

Wann is a nationally-acclaimed sports psychologist. Having published two books, he primarily specializes in the psychology of sports fans, and has been featured in publications like  Bleacher Report, Sports Illustrated, ESPN and more. Wann has even worked with notable athletes like Michael Phelps and Cal Ripken Jr. on various subjects.

Does the post-fight skirmish that occurred after the McGregor/Khabib fight help or hurt the UFC’s bottom line?

“Usually, it’s no news is bad news. Usually you just want people talking about you. That’s not always the case, right? The concussion controversy in the NFL, that’s not a good thing. The kneeling during the National Anthem, that’s not necessarily a good thing. But if your product markets people beating the snot out of each other, to have the news covering people beating the snot out of each other, it can probably lead to some intrigue and maybe promote a future fight. I don’t think anybody that is a fan of the UFC would go, ‘I don’t think they should fight like that; I’m not going to watch this anymore,’ because probably if you’re a UFC fan you probably like watching people beat each other up.”

What’s the difference between this and the “Malice in the Palace” fight that occurred in the NBA?

“Now, that’s a black eye. You can’t even have NBA players beating each other up; you cannot get the fans involved. I mean that’s crossing a line where you’ll lose that lawsuit. I think that if enough of that stuff happens, the league is going to start saying ‘OK, enough is enough. We have to have greater protection to keep the fans off the court.’ In college football now, you can’t rush the field. Why don’t they want the fans to rush the field, because they don’t want fans to celebrate? No. Because they don’t want fans interacting with the opposing team’s players. You lose a heartbreaking game and then 100,000 drunk people come around you; that’s a bad scenario.”

Pittsburgh Steelers running back Le’veon Bell is still in the midst of his holdout seven weeks into the season. What have you gathered from the situation?

“I get what he’s doing. He’s trying to protect his future, and I wouldn’t disparage anyone for doing that. But saying, ‘I’m ready to play; I’ll see you in week eight.’ Why wouldn’t you say, ‘I’m ready to play; I’ll see you tomorrow.’ I think most of the linemen figure out, yeah, he’s the franchise player, but how that cannot lead to hard feelings in the locker room I have no idea. I don’t see how there’s going to be harmony in that locker room.”

Do you think that “get-your-money-attitude” always been prevalent in professional sports?

“No, because now you can make so much. When I grew up a lot of baseball players had an offseason job because they weren’t making a million plus. I always remember when Babe Ruth got this big contract for the time, and he made more than the president. Someone asked him, ‘What do you think about making more than the president?’ And he said, ‘I had a better year.’ But it’s different now because the stakes are higher. If you look at the average salaries pre-free agency when they had no bargaining, now it’s free agency and really arbitration that have shot the prices up. So it’s way different than it was.”

Is there a right and wrong in the Bell situation?

“I don’t think there is a right or wrong. Because football’s a team sport, and there’s no ‘I’ in team, but there is a ‘me’. It’s a team sport, but it’s also his life. I would never tell a player he has to play; I don’t think you can do that. At the same time, his teammates have to be wondering, ‘Are you with us?’ because if you’re with us, you’d probably be with us. I can see both sides.”

Should there be actual team loyalty or organizational loyalty in professional sports?

“Both. ‘Seinfeld’ had an episode where he talked about since players change uniforms so much, you’re not rooting for the players, you’re rooting for laundry. I always think of Roger Clemens. There was a time when Yankee fans hated that man because of the Red Sox, then all of a sudden he signed with the Yankees and it was like, ‘Oh, we love him.’ I think the loyalty has obviously gone down because of free agency because they are better able to dictate where they play, as they should, but it’s first and foremost a business. But I do think fan bases respect loyalty. It’s so rare to see a player stick out his whole career with a team. So I think that there’s loyalty, but I don’t think it supersedes the pocket book.”

Murray State football is currently [3-0] in the OVC. Are you starting to notice excitement around the football team this year?

“For those of us that remember the years that we were really competitive in football, those were really fun years. There aren’t a lot of people at Murray that know those times. To call myself a Murray State football fan would be an exaggeration, but I know what this campus is like when the football team’s good. It’s fun. It’s not basketball fun because it’s one-one-double-A, but it’s pretty neat to see 14,000 people over there at a game where 10,000 aren’t there to watch the band. It’s neat to see a town galvanize around a championship-caliber football team, and host playoff games and win on field goals and things like that. It’s never like it is for basketball; this will always be a basketball-first school.”

How do you establish the winning culture that, say, Murray State basketball has?

Racers stand 4-1 after weekend in Seattle

Athlete of the Week, Athletics

The News’ Athlete of the Week: Mark Ventura

Professor asks students what their epitaphs will leave behind