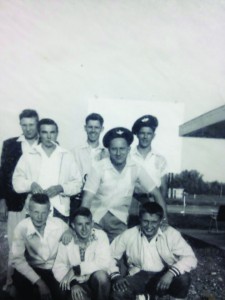 Pictured above is the first ever crew that worked at the Calvert Drive-In in 1953, when the outdoor theater first opened. The theater has been owned by the Harrington family its entire existence. || Photo courtesy of Calvert Drive-In

Out of the eight drive-in theaters remaining in Kentucky, one of them is located in Marshall County’s own Calvert City, Ky, just a 40-minute drive from Murray.

The Calvert Drive-In was built in 1953 by the grandparents of John Harrington, who is now the current manager of the drive-in.

“It has always been in the family,” Harrington said. “This is our 60th consecutive season. There have been several different family members manage the drive-in. I manage it now. We’ve got four generations of family involved in it.”

Having an outdoor theater has not always been easy for the Harrington family, though.

The family has seen the drive-in survive even the toughest of times for both Hollywood and movie theaters.

“1958 was a hard year for drive-ins,” Harrington said. “There was a lot of politics in Hollywood and politics in general. Drive-ins had a really bad name for playing B-rate movies and playing rough stuff. In the late ‘50s/early ‘60s when TVs really started becoming popular, people could stay at home and catch up on the news. Back in the ‘30s and ‘40s, people would go to the theaters to see what was going on in the war, and there were a lot of news-reels. TVs started to hurt (drive-ins and theaters).”

Regardless of the changing times and technology, the Calvert Drive-In stuck around.

“We just kept hanging in there,” he said. “We had a niche for good hamburgers, so that kind of helped. At some point in time, there were five drive-in theaters in Marshall County alone. We’re the only one left in western Kentucky now. The next closest one is in Beaver Dam.”

Harrington said the outdoor theater has gone through a variety of changes over the recent years.

From building a new screen in 2003 to remodeling the concession area in 2007, the Harrington family have given their business an upgrade.

This year, however, was perhaps their most important upgrade.

Harrington said this is what the industry is calling for and, ultimately, it is a much easier process. He said not having to mess with the film eliminates about 15 hours of manual labor each week.

“They say by the end of this year there will be no 35 millimeter films,” Harrington said. “I’ve already seen several drive-ins pull out of business this year because of that. It’s very expensive to do.”

As far as the movies go, the Calvert Drive-In keeps everything family-friendly. Playing only G, PG and PG-13 movies, families and groups are its main customers.

“We try to keep a safe, clean atmosphere for the family,” Harrington said. “That’s the focus, because they can bring their pet or spread out in front of their car and just have a good time.”

Aside from playing two films for the price of one, the Calvert Drive-In has food options that are unique to most theaters.

“Our pizza is all homemade; it’s a recipe I’ve worked on for over 20 years,” Harrington said. “Our hamburgers are cooked just like granny made them back in the ‘60s. We cook it all right on the spot. You can see your food being prepared right there in front of you.”

Harrington said they also have a lot of people who call in and place orders just for the food alone.

“Affordable entertainment would be the standard over any other movie theater,” he said. “You can get a coke, popcorn, hot dog and candy for $3.40. You can’t even get a coke for that at a regular indoor theater.”

While the drive-in is not open year-round, it does remain open for the majority of the year.

With its season beginning in March and lasting through November, Harrington is aiming for the year-round goal.

Currently, the theater is open only on weekends, the drive-in will be open daily once the Marshall County school district is on summer vacation, Harrington said.

Faces & Places is a weekly series that profiles the people and places of Murray and the surrounding areas. Every person and every place has a story. Let us tell it.

Movies to check out later this year